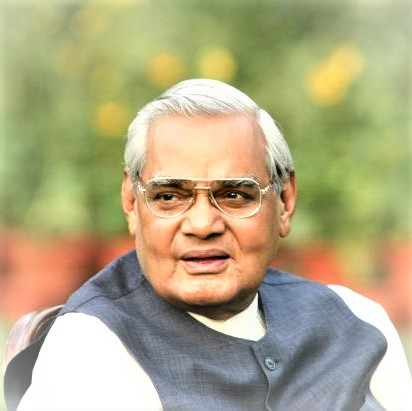 “Education, in the truest self of the term, is a process of self-discovery. It is the art of self-sculpture. It trains the individual not so much in specific skills or in specific branch of knowledge, but in the flowering of his or her latent intellectual, artistic and humanist capacities.”

Bharat Ratna, Shri Atal Bihari Vajpayee Ji, the former Prime Minister of India was a revered statesman, an ace wordsmith, powerful orator and truly a romance of the verses. At a time when a pacific mien was considered a weakness, Atal Ji proved that it can be a part of one’s legacy. His poetic instinct set him apart from all politicians of his time. As a part of his legacy, he compiled soul-stirring poems that shall forever be cherished and fondly remembered.

As India’s Prime Minister, Foreign Minister, Chairperson of various important Standing Committees of Parliament and Leader of the Opposition, he was an active participant in shaping India’s post-Independence domestic and foreign policy.

Shri Vajpayee’s first engagement with nationalist politics was in his student days, when he joined the Quit India Movement of 1942 which hastened the end of British colonial rule. A student of political science and law, it was in college that he developed a keen interest in foreign affairs – an interest he had nourished over the years and put to skilful use while representing India at various multilateral and bilateral platforms.

Shri Vajpayee Ji had embarked upon a journalist’s career, which was cut short in 1951 when he joined the Bharatiya Jana Sangh, the fore-runner of the present day Bharatiya Janata Party, the leading component of the National Democratic Alliance. A critically acclaimed poet, he took spare time off from affairs of state to indulge in music and cooking.

Born in the family of a humble school teacher Sh. Krishna Bihari Vajpayee on December 25 1924, in the erstwhile princely state of Gwalior (now a part of the Indian State of Madhya Pradesh), Shri Vajpayee’s rise in public life is a tribute to both his political acumen and Indian democracy. Over the decades, he emerged as a leader who commended respect for his liberal worldview and commitment to democratic ideals and values.

An fervent champion of women’s empowerment and social equality, Shri Vajpayee Ji believed in a forward-looking, forward moving India, a strong and prosperous nation confident of its rightful place in the world. He stood for an India anchored in 5000 years of civilisational history, ever modernising, ever renewing, ever re-energising itself to meet the challenges of the next generations.

India’s highest civilian honour, the Bharat Ratna, was conferred upon him in recognition of his selfless dedication to his first and one only love, India, and his more than half-a-century of service to society and the nation. In 1994, he was named India’s ‘Best Parliamentarian.’ The citation read: “True to his name, Atal Ji is an eminent national leader, an erudite politician, a selfless social worker, forceful orator, poet and litterateur, journalist and indeed a multi-faceted personality. Atal Ji articulated the aspirations of the masses. His work world over echo total commitment to nationalism.

Atal ji had special love for Himachal Pradesh and he loved the honest, humble and peaceful people of Himachal. He often visited Manali the nature’s Paradise. Govt. of Himachal Pradesh has aptly named the Health University of the state after the name of Atal ji, a small gesture towards his enormous contribution to the nation.